Issues of Concern and Specific Abuses of FDA’s Temporary Guidelines

Due to the worldwide COVID-19 crisis, much attention is being focused on the use of hand sanitizers as part of one’s personal hygiene program in an attempt to safeguard health. As a result, the continuing manufacturing, testing and availability of these products is of paramount concern to consumers and to the United States Food & Drug Administration (FDA).

Let CPT℠ assist in the protection of your “brand” and your reputation.

Since it has been clearly shown that there are illegal and in some instances, dangerous hand sanitizer products being offered for sale within the US during this COVID-19 crisis, every product owner should be concerned about the quality of the products that they purchase for distribution. CPT℠ can provide rapid screening of hand sanitizers with fast turnaround times. We can tell you if the product you have purchased or are considering to purchase is a legal product, free from disallowed ingredients. CPT℠’s state-of-the-art Analytical Chemistry and Microbiology Laboratories are professionally staffed and stand ready to assist you in actively protecting your “brand” and your reputation as a whole. Why not contact us today?

Request a quote to test your hand sanitizer.

Regulatory Status of Hand Sanitizers in the US

Here in the US, hand sanitizers are regulated as drug products. Nearly all hand sanitizers marketed for consumer use are Over-the Counter (OTC) Drug products which require compliance with the OTC Drug Monograph for “Consumer Antiseptics; Topical Antimicrobial Drug Products for OTC Human Use” found in 21 CFR Part 310. The final form of this Monograph took full effect on April 12, 2020 and allows only three (3) possible active ingredients which may be used singly in a hand sanitizer: Ethyl Alcohol (Alcohol), Isopropyl Alcohol (IPA) or Benzalkonium Chloride.

On April 12, 2019 FDA issued a Final Rule regarding the OTC Drug Monograph for “Consumer Antiseptics; Topical Antimicrobial Drug Products for OTC Human Use”. With this final rule come several major changes which affect all manufacturers and owners of hand sanitizer products. The major changes found in the final rule are as follows:

FDA has not yet accepted (approved) any Active Pharmaceutical Ingredient (API) for inclusion in the OTC Drug Monograph for Consumer Antiseptic Rubs since suitable information has not yet been submitted which FDA feels will allow them to conclude any as being Generally Regarded as Safe (GRAS) and Generally Regarded as Effective (GRAE).
Of the 31 possible active ingredients which had previously been used or proposed for use in OTC consumer antiseptic rubs, FDA has now ruled 28 ineligible for inclusion in the Monograph. Products containing any of these 28 active ingredients may no longer be placed into interstate commerce starting April 12, 2020.
FDA is deferring action on the 3 remaining API’s (Ethanol, IPA and Benzalkonium Chloride) for use in consumer antiseptic rubs saying they are the only API’s that are  eligible candidates for inclusion in the Monograph but that they have still not been officially accepted since their GRAS/GRAE status has yet to be fully demonstrated.
FDA provides testing requirements that sponsors must conduct if they wish to submit data supporting the GRAS/GRAE status of any of the three eligible API’s. This required testing includes:

a. In Vitro testing which includes either Minimum Bactericidal Concentration (MBC) or Minimum Inhibitory Concentration (MIC) and Time-Kill testing using the bacteria specified in the 2016 Proposed Rule (Federal Register Vol.81, No 126 – Thursday, June 30, 2016).

b. In Vivo human clinical testing comprised of 2 pivotal studies each conducted on at least 100 subjects, at two different/independent test sites using both Positive and Negative controls.

FDA does not define any requirements for final formulation testing. The following statement is found in FDA’s response to Comment 10 within the Final Rule:

What are the take-aways from the Consumer Antiseptic Rub Final Rule?

1. Starting April 12, 2020 only those hand sanitizers containing one of the following three “eligible” active ingredients may be placed into interstate commerce: Ethyl Alcohol (“Alcohol”), Isopropyl Alcohol or Benzalkonium Chloride.

2. FDA will defer any action against OTC hand sanitizer products conforming with the Final Rule, pending receipt of suitable information that will support FDA’s determining GRAS/GRAE status for any (or all) of the three “eligible” active ingredients.

3. FDA encourages industry to submit data conforming with the In Vitro and In Vivo testing requirements stated in the Final Rule which may be used in support of granting GRAS/GRAE status to any or all of the three “eligible” active ingredients.

4. Hand sanitizers are drug products requiring the conducting of GMP-compliant testing and stability studies however FDA currently declines to specify the testing that would be deemed appropriate for final formulations of consumer antiseptic rubs.

In an attempt to help meet the rising demand for hand sanitizers in the US, FDA has issued a series of Guidance Documents starting in March 2020 which include policy for temporarily relaxing certain GMP requirements for the manufacturing of hand sanitizers for consumer usage. These temporary policies allow non-traditional drug manufacturers to produce alcohol-based hand sanitizers for consumer use, so long as the specific formulations and labeling requirements provided by FDA in the Guidance Documents are strictly followed.

It should be noted that the two hand sanitizer formulations included within FDA’s “temporary” guidelines are the very same formulas sanctioned by the World Health Organization (WHO).

Additionally, FDA is temporarily permitting non-traditional API (Active Pharmaceutical Ingredient) manufacturers to provide the two allowable alcohols (Ethyl Alcohol and Isopropanol) for use in hand sanitizers under these temporary guidelines.

Issues of Concern and Specific Abuses of FDA’s Temporary Guidelines

Unfortunately, this temporarily relaxed regulatory environment relating to the manufacturing of hand sanitizers has facilitated an influx of opportunist and unqualified organizations into the hand sanitizer supply chain.  As a result, FDA is finding illegal and in some instances, dangerous products on store shelves.  Examples include products containing Methanol (“wood” alcohol) which is highly toxic; combinations of alcohols which are not permitted under the OTC Drug Monograph or the temporary FDA Guidelines; subpotent levels of alcohol, and the inclusion of excipient ingredients not permitted under the temporary Guidelines. 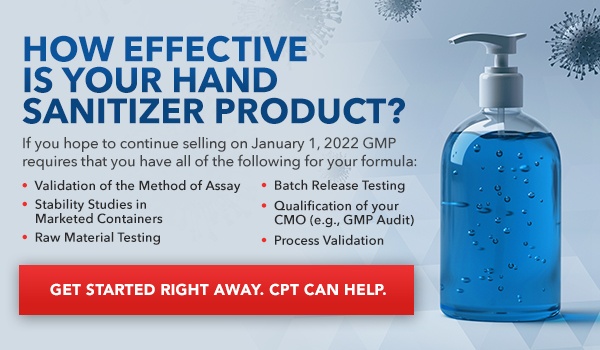